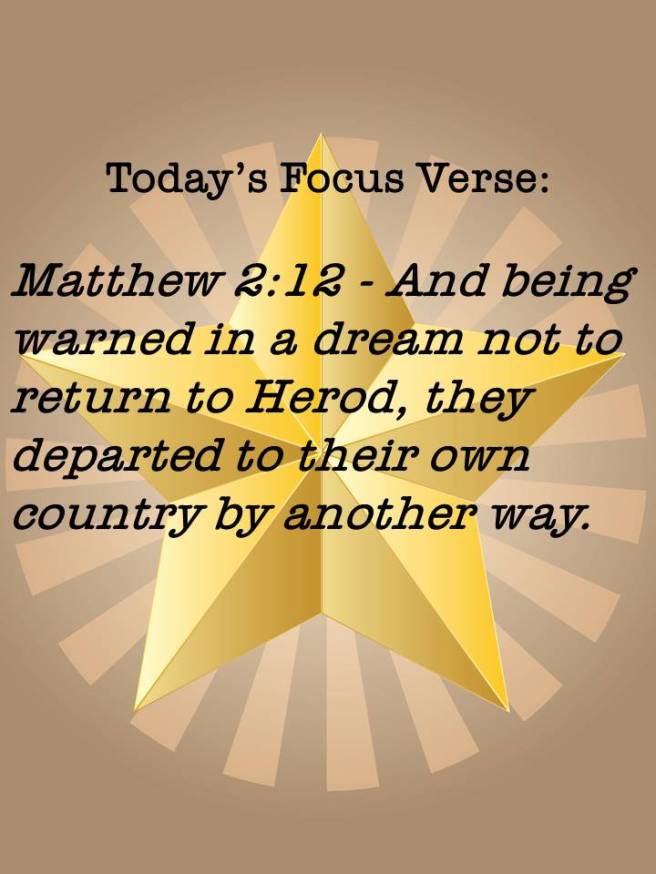 12 And being warned in a dream not to return to Herod, they departed to their own country by another way. 13 Now when they had departed, behold, an angel of the Lord appeared to Joseph in a dream and said, “Rise, take the child and his mother, and flee to Egypt, and remain there until I tell you, for Herod is about to search for the child, to destroy him.” 14 And he rose and took the child and his mother by night and departed to Egypt 15 and remained there until the death of Herod. This was to fulfill what the Lord had spoken by the prophet, “Out of Egypt I called my son.” 16 Then Herod, when he saw that he had been tricked by the wise men, became furious, and he sent and killed all the male children in Bethlehem and in all that region who were two years old or under, according to the time that he had ascertained from the wise men. 17 Then was fulfilled what was spoken by the prophet Jeremiah: 18 “A voice was heard in Ramah, weeping and loud lamentation, Rachel weeping for her children; she refused to be comforted, because they are no more.”

This is a reference to Hosea 11:1, which does not seem to be a prophecy in the sense of a prediction. Hosea was writing of God’s calling Israel out of Egypt into the Exodus. Matthew, however, gave new understanding to these words. Matthew viewed this experience as Messiah being identified with the nation. There were similarities between the nation and the Son. Israel was God’s chosen “son” by adoption (Ex. 4:22), and Jesus is the Messiah, God’s Son. In both cases the descent into Egypt was to escape danger, and the return was important to the nation’s providential history. While Hosea’s statement was a historical reference to Israel’s deliverance, Matthew related it more fully to the call of the Son, the Messiah, from Egypt. In that sense, as Matthew “heightened” Hosea’s words to a more significant event—the Messiah’s return from Egypt—they were “fulfilled.” – The Bible Knowledge Commentary