Should We Just “Make the Yoke”? ( From http://www.NYCShepherd.com)

In the press and on the internet columnist Kirsten Powers and others are encouraging Christians to just “bake the cake” for the wedding of a gay couple rather than stand up for their religious convictions. (http://www.usatoday.com/story/opinion/2014/02/18/gays-lesbians-kansas-bill-religious-freedom-christians-column/5588643/ and http://rachelheldevans.com/blog/jesus-religious-freedom-gay-lesbian-discrimination) In light of this discussion, I would like to take us on a bit of a journey. Let’s call it a journey of conscience. Please think back with me.

The year is 1859. The Supreme Court of the United States in the Dread Scott decision has declared Negros to be non-persons without constitutional rights. You have immigrated from England where William Wilberforce’s crusade against slavery has made slavery illegal for 30 years by now. As a Christian, you find slavery and its treatment of other human beings morally wrong.

You live in Richmond, Virginia with your family and extended family, your trade is that of a blacksmith. A local plantation owner named John Smith comes to you with a special request. He wants you to make him an oxen yoke. However, he wants it made in a special way. He wants it to be adapted so that it will fit two people to do the pulling instead of two oxen.

You know that John Smith is going to use this for his slaves. In making this you know you will be participating in something that is immoral, though completely legal. Your conscience tells you to turn him away. He is angry with you when you do so. There are other blacksmiths who he can do business with but he wants you. He threatens to bring you before the town council and to stop people from going to your business, to effectively shut you down and take away your ability to make a living.

Is your conscience, stemming from your religious heritage, wrong? Should you ignore it or follow your convictions? Should you stand up for your beliefs or just make the yoke?

In this scenario we should be uncomfortable with the possibility of this individual being forced to violate their conscience. In a free society, businessmen/women should have the right to object to participating in scenarios that go against their religious beliefs. Freedom of religion and conscience are at the heart of our value system.

In a similar manner, we should be uncomfortable with the possibility of an evangelical Christian or Catholic business person being forced to violate his or her conscience by participating in a same sex wedding. To this point in our nation, we have always placed a high premium on freedom of conscience. We have made provision for individuals to conscientiously object to such things as military service (Quakers), certain medical treatments (Jehovah Witness’), certain school programs (parents with objections) and even participation in Social Security (the Amish).

Is it too much to expect that individuals be permitted to continue to exercise their right to religious freedom? Does not our freedom of religion ensure us all the right to follow our consciences under God? Does this not include our right of refusal to be involved in matters that we deem to be morally objectionable?

An individual’s conscience should be respected. A person who deems it morally objectionable to participate in a gay wedding should not be forced to do so. In addition, they should not be labeled homophobic or bigoted for following their religious convictions. They are simply people of conscience. We still allow people to follow their conscience in this country don’t we?

If the gay couple has the right to life, liberty and the pursuit of happiness, does not the Evangelical Christian or the Catholic still have that same right? For conscience sake, let us all stand up for our religious liberty without wavering before we lost it and the freedom of conscience that comes with it. 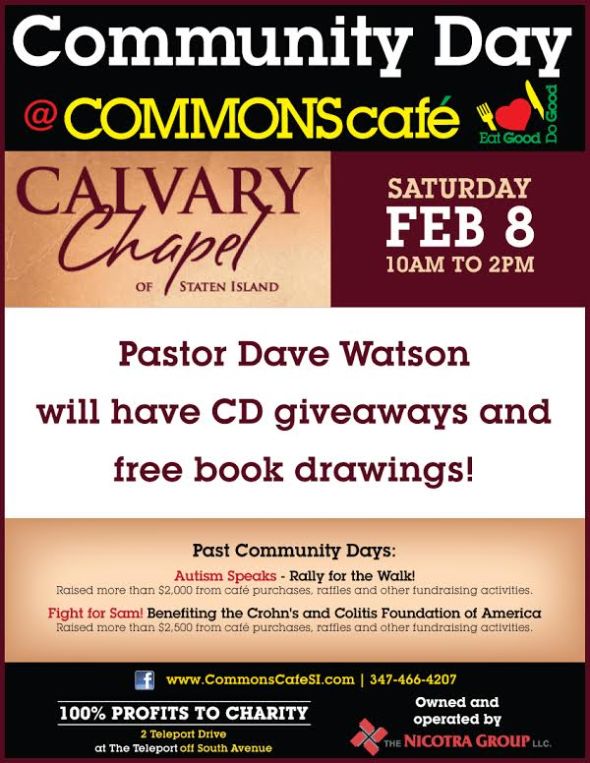 This Saturday, February 8th from 10:00 A.M. – 2:00 P.M.  Calvary Chapel will be having  a Community Day at the Common’s Café in the Teleport  off of South Ave. Calvary Chapel’s Radio program “God in Our City” will be the focus.  The program is heard every Saturday from 11:00 A.M. – 11:30 A.M. on 570 WMCA, New York’s Christian Talk and is hosted by Pastor Dave Watson. The weekly interview show highlights “What the Great God of the universe is doing in our city”. Since going on the air last January the show has spotlighted New York City Pastors, politicians, educators and lay people who are making a difference for the kingdom of God. The event is a fundraiser for the radio program and all the products from the meals purchased will go to the Church which sponsors “God in Our City”. The event will include book give ways and a free cd of the program’s first year of interviews to everyone in attendance. For more information or directions please call the Church office at 718-720-5390 or the Common’s Café at 347-466- 4207 or visit www.commonscafesi.com