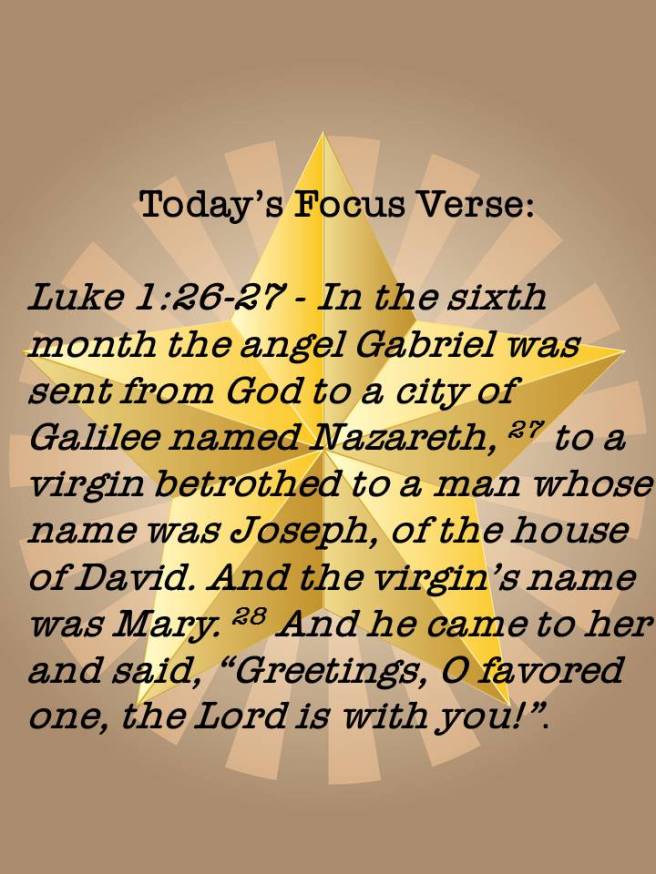 26 In the sixth month the angel Gabriel was sent from God to a city of Galilee named Nazareth, 27 to a virgin betrothed to a man whose name was Joseph, of the house of David. And the virgin’s name was Mary. 28 And he came to her and said, “Greetings, O favored one, the Lord is with you!” 29 But she was greatly troubled at the saying, and tried to discern what sort of greeting this might be. 30 And the angel said to her, “Do not be afraid, Mary, for you have found favor with God. 31 And behold, you will conceive in your womb and bear a son, and you shall call his name Jesus. 32 He will be great and will be called the Son of the Most High. And the Lord God will give to him the throne of his father David, 33 and he will reign over the house of Jacob forever, and of his kingdom there will be no end.” 34 And Mary said to the angel, “How will this be, since I am a virgin?” 35 And the angel answered her, “The Holy Spirit will come upon you, and the power of the Most High will overshadow you; therefore the child to be born will be called holy—the Son of God. 36 And behold, your relative Elizabeth in her old age has also conceived a son, and this is the sixth month with her who was called barren. 37 For nothing will be impossible with God.” 38 And Mary said, “Behold, I am the servant of the Lord; let it be to me according to your word.” And the angel departed from her.

In the dialogue that took place between Mary and the angel Gabriel, the angel told her first of all that she was “highly favored with God.” Mary was troubled. Perhaps because of her humility, she may have been thinking, “Why me? I’m too insignificant to find favor with God.” On the other hand, perhaps she had the innate wisdom to comprehend something at the very heart of the mystery of life and the mystery of God: that those highly favored by God do not have a life of unbroken happiness.

Remember that Mary was a Jew, and the Jews were the chosen people, a people who found favor with God. Jews are still the chosen people. For three thousand years those chosen people have suffered perhaps as no other people. The Auschwitzes and the Dachaus are only the latest in a whole line of indignities and obscenities endured by the chosen people. And I would like to believe that Mary understood at some level that there is a tremendous price to be paid by those who are highly favored by God. – The Preachers Bible Commentary