Molly woke early the next morning, Saturday morning, to the sound of ploughs and sand trucks. The road crews were clearing the streets and Molly was clearing her head. She needed to go out again. She need more yarn, different colored yarn to finish the project Rebecca had started. Amazingly, serendipitously, maybe even miraculously the blue yarn picked by Gracia matched perfectly what Rebecca had started. Now all she needed was the red, the gold, the silver and the purple. The semi -charged cell phone in hand she went off to the same store as yesterday hoping to run into Gracia, my friends call me Grace, again. She didn’t know that it would be sooner than she could have anticipated. 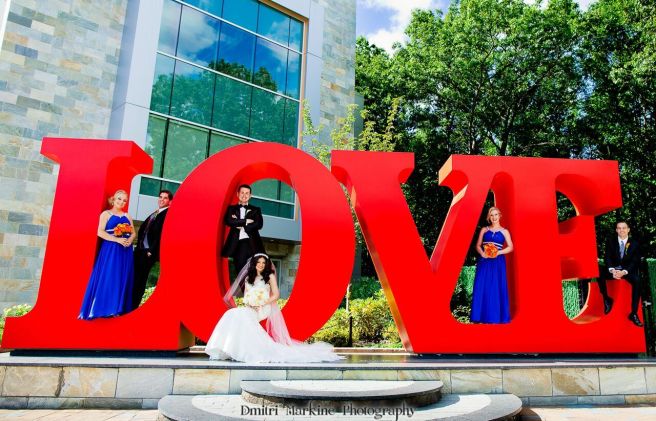 As she made the turn out of her complex she was greeted with a sight that had become so familiar she had no longer noticed it. For some reason today was different. Right in front of her were the huge Red letters L O V E outside the Hilton Hotel. The word reminded her of Rebecca’s last words to her in the unsent text on her damaged red phone. It gave her the chills. Two spine tingling events in two days. This was a bit much for her.

As she began her drive she was again slowed by the traffic even though it was early. Having stopped at a red light she looked to her right and was surprised, no, shocked to see Gracia -my friends call me Grace – standing at the bus stop in a bright gold coat and hat. Molly pulled over, rolled down her window and shouted across through the passenger’s side window, “Jump in, I’m going your way.”  Gracia, once she recognized Molly, complied, quickly jumping in the passenger side. Off Molly went to Hobby Lobby with Gracia – or  was it Grace –  in tow.

The two strangers had an expected moment of awkwardness before Gracia broke the ice. “Fancy meeting you here this morning” she said with a smile. “Do you have time for a quick stop before going to Hobby Lobby?” Molly was suddenly all in with her new friend Grace. “Point the way” she heard herself say almost enthusiastically. “Over there” said Grace pointing to one of the toughest housing projects in the city seen just to their right down a main drag.

As she turned at the next intersection, Molly could not resist asking Grace, where they were going.  Grace replied with a smirk, “Well of course, I mentor a young girl there and I need to drop off her Christmas gift,”  Molly now had a few more questions to ask Grace like “How old are you?” and “Why are you, a seventy five year oldish woman going to the projects alone to mentor someone?”  and  “How long have you been doing this?”  Regretfully, that would all have to wait because they were pulling into the projects and Grace was already about to jump out of the car and find her beloved mentee. “You can stay in the car or follow me” she said back into the car after jumping out as it barely had come to a halt.  “This will only be a minute, I can’t be late for work” she added.

A little overwhelmed already, Molly chose to sit this one out. “Maybe next time” were the words she whispered to herself. She was a bit apprehensive. She had never actually been here before.  Safe in her parked car, she saw Grace approach a skinny dark-skinned girl who looked about 12 years of age and hand her a wrapped box. They exchanged what seemed to be pleasantries, hugged and just like that Grace was back in the car and they were on their way to Grace’s employment and Molly’s shopping destination.

After a second pause of awkward silence Molly asked Grace “So, how long have you been a mentor?” “Since my church made me aware of the opportunity” she replied.  “These young girls need a steady influence in their lives. They need a good foundation. I’m trying to make a difference in one life at a time, but truth be told I do it as much for me as for them.”  “How’s that?” Molly managed to choke out afraid of the answer she might hear. Grace’s demeanor changed as she said in a quiet tone, “After I lost my granddaughter Jenny three years ago I was a basket case. I was helping her mother raise her and then….” Her voice trailed off.  “I got so depressed I moved away, I just wanted to be alone.” Molly thought she needed to pull the car over because she couldn’t see the road for the tears in her own eyes. Grace continued, “But last year near Christmas I stopped moping and started hoping again and that’s when this opportunity came.” “Maybe I don’t have Jenny to laugh and cry with or to mentor, but with the good Lord’s help I can use my time to help others.  You understand, right?  I had to make my peace with it and with God, You understand, right?” she repeated.

Molly was so glad they had reached the store by then and that she didn’t have to answer. She and Grace got out of the car and with a quick “thank you” and “your welcome” headed for their prospective stations, Grace to clock in and Molly to buy yarn. Taking out the battered red cell phone with the picture, Molly tried discreetly to match the colors and then went to check out. Grace’s words “Made my peace with God” seem to hang overhead like a cloud of smoke. How does one ever do that?” she thought, “How did Grace do that?”  In yet another twist of fate her cashier was Grace. Grace could see Molly wasn’t right. Right there in line Molly found herself agreeing to meet Grace for dinner on none other than Christmas Day since neither of them had any other place to be.  As quickly as she could,  Molly was out the door to head to the safety of her apartment and to her project and to feeling  close to Rebecca again. It might take awhile though, it was starting to snow.

One thought on “The Christmas Scarf – Part 4”