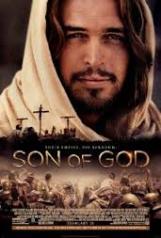 “You are entitled to your own opinion but not your own facts” one politician famously said to another. In a nutshell that’s how I feel about the recently released movie “Son of God.”  I think I understand what the producers Roma Downey and Mark Burnett were trying to accomplish.  I think there is a lot here to be commended, but I am very uncomfortable with the way they went about it and the final product.

Having seen the movie I am of the opinion that the producers want us to see Jesus in a specific light.  They say they want us to see Jesus as the Son of God but that message easily gets lost. The message that comes through is that Jesus is a politically correct (for our day) counselor and a therapeutic healer (He is also very good looking, compare to Isaiah 53:2). Narratives from the Gospels are selectively chosen to prove their point. Then the producers actually change some of the narratives to make the image of Christ displayed on screen fit their preconceived notion of Him.

In doing this, Downey and Burnett and their team are not interpreting the Gospels, they are manipulating the Gospels. To take artistic license with a book or screen play everyone agrees is to be expected. To change or alter “The Book” to paint a picture of Jesus that you or I have conjured up is not something we can let go as harmless. It can actually be quite harmful especially to someone in search of truth.  It is always a little dangerous to portray Jesus in any light other than what is clearly revealed in the Scriptures.

Here are a few illustrations of what I am trying to communicate:

In a scene early in the movie Jesus and Peter are seen in a boat by themselves. Jesus tells Peter to pull his net up and there is a huge load of fish that almost breaks the net, Cool, right?  Not really. In the gospel account in Luke (Luke 5:1-10) we see this event portrayed quite differently. It’s not Jesus and Peter alone but many others are there and  are involved.  Jesus is not counseling Peter privately but proving Himself to be the Son of God in front of Peter and the rest of the disciples. The moment is humiliating for Peter and those with Him.  Jesus also calls Peter to follow Him to be a fisher of men. At no point did he say follow me and we will change the world as the film depicts. These distinctions are worth noting and one would think, worthy of being accurately captured in the film.

Later, Jesus is called to the tomb of His friend Lazarus who is dead. In the film He goes into the tomb. He puts his hand on Lazarus’ head, runs his fingers through his hair and raises him from the dead by talking gently in his ear.  Super, right? Not really. Read the account in John 11:1-44. You will find that Jesus wept over the pain of Lazarus’s sisters, Mary and Martha. In addition, He never went into the tomb. He stood outside the tomb and the text clearly says “When he had said these things, he cried out with a loud voice, “Lazarus, come out.” (John 11:43). Lazarus then comes out bound in grave clothes. What a cinematic moment this would have made!  Downey and Burnett, however, totally make up a version that fits their image of the therapeutic Jesus.

Throughout the film the disciples are accompanied by a lone woman, Mary Magdalene. There is no Scriptural support for a single woman hanging around with Jesus and the disciples. Truth be told, this would be totally taboo in the culture of that time. We do learn that a group of women including Mary Magdalene follow Jesus (Luke 8:1-3), but they were not part of His chosen group of disciples. The producers want us to see Jesus as having men and women disciples. They don’t want Jesus to be offensive because he only called men apostles. It seems that their desire for political correctness causes them to manipulate the story. Now that’s offensive.

Anyone who reads the Bible’s account of the life of Christ will see Jesus teaching a lot. For the life of me I don’t understand why there is not an extended sequence of the Sermon on the Mount in the film. It is universally agreed that it is the most influential sermon in history. It gets a minor part in the film. Again, I think the producers didn’t want to make Jesus look like a preacher or teacher but a man of the people, someone who taught as He went. Surely he did that, but He also sat people down and taught them (Matthew 5-7 and Luke 9:11-17).

I could probably spend another two or three pages giving further examples, but I’ll stop here. I don’t want to pick on Rona and Mark and their team. They probably have great intentions. In fact I really wanted to love the movie. I encouraged people to go see it and provided free tickets to over 1000 people to attend. I wanted it to be a great tool to share our faith in this increasingly cynical world. I was sorely disappointed.  All the hype was just that, hype.

In reality the movie was, in my opinion, just okay. It wasn’t powerful because it didn’t clearly reflect who Jesus really is. Someone teaching a series or leading a Bible study using it would have to spend a good portion of their time correcting the inaccuracies. If the movie has any staying power, individuals for a generation will believe the movie’s portrayal of Jesus over the Scriptural account of Him. It’s not just a matter of interpretation it is a matter of distortion.

Over the past six months I have immersed myself in the Gospels. I try and read at least one gospel a week if not more. I try to read my gospel of the week over a couple of days, making time to read large portions. The results in my life have been amazing. My love for Christ has grown so much. I have seen Him in a new light. I have had to change my view of Him to match the Scriptures. I have had to make changes in my life to come in line with His exhortations and example.

If you’ve seen the movie, that’s super. Now, read the Book for the real scoop on Jesus. If you haven’t seen the movie you might want to save your money. Use the 2 hours and 20 minutes you might have spent in the movie “Son of God” reading the Gospel of John which reveals Him as such. You can probably finish it in that amount of time. If it would make you feel better eat some popcorn as you read.  Seeing the Son of God at the theater $12.00 — seeing the Son of God in the pages of Scripture……. Priceless!